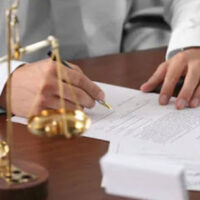 Probate and trust disputes are often resolved through negotiated settlement as opposed to contested litigation. A settlement agreement is a legally binding contract that may be enforced in court if necessary. That can mean that the aggrieved party either has to file a new civil lawsuit or, if possible, seek to enforce their rights as part of the original litigation giving rise to the settlement.

This type of jurisdictional issue can prove more complicated to resolve than you might think. A recent decision from the Florida Second District Court of Appeal, Pulte v. The New Common School Foundation, provides a helpful illustration. In this case, the appellate court held that a probate judge improperly retained jurisdiction over a prior dispute settled between a probate estate, a trust, and a charitable foundation.

This particular case centered on the late William J. Pulte, who was one of Florida’s most prominent real estate developers prior to his death in 2018. During his lifetime, Pulte made several charitable pledges to the New Common School Foundation, a Detroit-based charter schools organization. Pulte’s revocable trust pledged several million dollars worth of donations to the foundation.

After Pulte died, his son was named personal representative of his estate and successor trustee of the trust. The foundation promptly filed a creditor claim seeking fulfillment of Pulte’s pledges. When the son objected, the foundation filed suit in the Florida probate court administering Pulte’s estate.

This suit led to a negotiated settlement between the parties. The son, acting as personal representative, then asked the probate court to approve the settlement, which it did. Critically, however, the probate court’s order “neither incorporated the Agreement nor reserved jurisdiction to enforce the Agreement,” according to the Second District.

But that was putting the cart before the horse, according to the Second District. As the probate court never expressly incorporated the settlement agreement into a formal judgment, or retained jurisdiction at the time it approved the settlement, it could not now exercise jurisdiction over the foundation’s petition. The foundation would have to file a separate civil lawsuit to pursue its claims against the probate estate and the trust.

These types of jurisdictional issues help to explain why parties should always strive to resolve disputes before the need for litigation. Of course, that is not always possible. So if you are involved in a similar type of dispute and need legal advice or representation from a qualified Pompano Beach estate and trust litigation attorney, contact the offices of Mark R. Manceri, P.A., today to schedule an initial consultation.