Can a Potential Beneficiary Contest a Still-Living Person’s Trust? 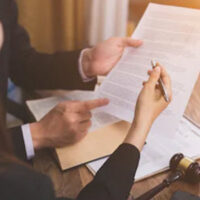 It is not uncommon for family members to express displeasure with changes to a loved one’s trust. In some cases, the disgruntled family member may even want to file a legal contest to a trust or its amendments. But when is that even permissible? Can anyone challenge a trust, even if the person who made it is still alive?

A decision issued earlier this year by the Florida Fourth District Court of Appeal, Habal v. Habal, helps clarify how the law works in this area. This case involves a revocable trust established by a man we’ll refer to as the settlor. The settlor initially created the trust following the death of his first wife. After the settlor remarried, he decided to amend the revocable trust.

The settlor’s son, who is a potential beneficiary of the trust, filed a lawsuit alleging the amendment was invalid, due to both “undue influence” on the part of the trustees’ and his father’s “incapacity.” A judge dismissed the lawsuit, holding the son lacked legal standing to challenge his still-living father’s trust.

On appeal, the Fourth District agreed with the trial court. It pointed to the plain language of Florida’s trust code, which states, “An action to contest the validity of all or part of a revocable trust, or the revocation of part of a revocable trust, may not be commenced until the trust becomes irrevocable by its terms or by the settlor’s death.” You see, estate planning trusts like this one are considered “revocable” by the settlor at any time before death. This means the settlor was free to revoke–or in this case, amend–the trust as he saw fit. No potential beneficiary of the trust, including the settlor’s son, has legal standing to contest the trust. Only upon the father’s death–when the trust is then considered irrevocable–is such a contest permissible.

The Fourth District noted there is one exception to this rule: If a guardianship has been created for a living person, the guardian may contest the trust on behalf of the incapacitated settlor. But in this case, the son was not his father’s guardian. So even if the son’s claims regarding undue influence or incapacity had merit, he was not the proper party to bring such issues before the court.

It is also important to note that even when a party has the right to contest a trust, a successful contest requires actual proof of wrongdoing. A judge will not invalidate a trust or trust amendment simply because the objecting party is unhappy with its terms. The legal burden is always on the person contesting the trust to establish some grounds for invalidity.

If you are involved in any type of trust dispute, either as the contestant or the trustee, it is imperative you work with legal counsel experienced in this area. To speak with a qualified Pompano Beach estate & trust litigation attorney, contact the offices of Mark R. Manceri, P.A., Attorney at Law, today to schedule an initial consultation.