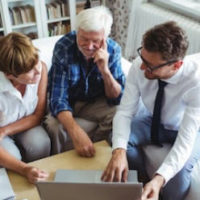 On August 16, 2018, world-renowned soul singer Aretha Franklin passed away as a result of advanced pancreatic cancer. Known for her powerful vocals and title as the Queen of Soul, President Barack Obama stated that Franklin ”helped define the American experience” and that “in her voice, we could feel our history, all of it and in every shade.” After her death, a dispute over her Wills ensued. At first, the media speculated that she did not have a Will in place. Later, her family entered probate court to dispute three different Wills that the singer purportedly wrote.

Sabrina Owens, the current personal representative of the Estate, discovered three “holographic wills” after the singer’s death. A holographic will is written by the Testator and signed by the Testator but one that hasn’t been signed by witnesses. The multiple Wills are dated June 21, 2010, October 20, 2010, and March 31, 2014.  Owens allegedly found the Will from 2014 under a seat cushion in the singer’s home.

Florida Does Not Recognize Holographic Wills

Holographic Wills are signed and handwritten by the testator. They do not have the signatures of witnesses. It is important to note that while some states recognize holographic wills, Florida does not. If a Will is handwritten, signed by the Testator and Witnessed by other people, a Florida Court recognizes it as an attested Will.

An attested Will must have the following requirements under Florida law to be legally valid:

Family Disputes Involving Wills Can Be Complicated. We Are Here To Help

When there are multiple Wills involved after the death of a loved one, tensions can run high. Perhaps one family member doesn’t trust the validity of one of the Wills. Maybe one of the Wills would change who the Personal Representative is or would cut someone out of the Will. If you’re involved in a dispute involving multiple Wills, contact Pompano Beach multiple wills lawyer Mark R. Manceri, P.A. to set up a consultation today.