What Happens When Multiple Wills Are Filed With A Probate Court? 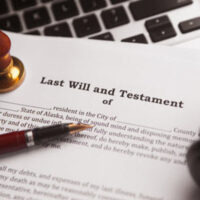 One thing that can trigger litigation in an estate is the purported existence of multiple wills. This can happen because a person signed a new will without first destroying the prior will. Or it may simply be a case where someone is presenting a document as a superseding will even if it appears to be irregular (or perhaps fraudulent).

Generally speaking, if there are multiple wills presented to a probate court, the most recent will is considered valid, provided it was executed in accordance with state law and it includes language clearly revoking any prior will. If the newer will is legally defective for any reason, the probate court may decide to admit the earlier will, again assuming it complies with state law.

How would Florida courts have handled this situation? Well the answer here is quite simple: The “new” will could not be admitted in Florida because it was holographic. To put it bluntly, Florida law does not recognize handwritten or holographic wills, even if it was executed in another state that does recognize such documents.

In other words, if a decedent left a regular typewritten will that was properly witnessed, and someone later tries to pass off a later handwritten document that is not in the testator’s handwriting as the decedent’s “true” will, it will get laughed out of court (figuratively speaking). Holographic wills simply are not recognized in this state.

One final issue to consider: If a document presented as a superseding will does not contain language revoking a prior will, it is possible the newer document may be treated as an amendment or “codicil” to the earlier will. Codicils are valid under Florida law, provided they are executed with the same formalities as the original will. So once again, a handwritten note purporting to “amend” a typewritten and witnessed will is not going to fly with a Florida probate court.

If you are involved in a dispute involving multiple or competing wills and need legal advice from a qualified Pompano Beach estate and trust litigation attorney, contact the offices of Mark R. Manceri, P.A., today to schedule a consultation.