How Leaving No Will Can Lead To Legal Problems 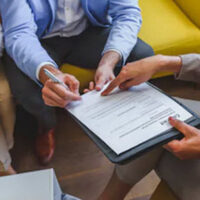 Many people die without leaving a valid will. When this happens, state law determines who will inherit the deceased person’s property. This is known as intestate succession. On paper, it is not a difficult process in most cases. For instance, if you died unmarried with three adult children and left no will, Florida’s law of intestate succession would divide your state equally among your three children. That is to say, each child would receive a one-third share of your estate.

Now this might sound like a good option. After all, you probably would have left everything to the kids in equal shares anyway had you made a will. So why bother making a will at all?

The problem is that equally dividing an estate on paper does not always translate into the real world so neatly. Sure, if all you owned at the time of your death were liquid assets like cash and stocks, those are easy enough to split three ways. But what if you own a house? Perhaps you want one child to keep the house while making separate provisions for your other children. Under intestate succession that may not be possible. The law simply assumes that all three children now co-own the house.

Can a No-Contest Clause Prevent Litigation Over My Trust or Estate?

A person making a will or trust has an understandable interest in minimizing the potential for future litigation over their estate planning documents. For this reason, people often include a “no-contest” or “in-terrorem” clause in their will or trust. This type of clause basically says any beneficiary who attempts to contest the validity of the will or trust in court will be disinherited entirely–or in some cases, have their bequest reduced to a nominal amount, like $1.

Ideally, no-contest clauses discourage baseless lawsuits. But they can also prevent heirs and beneficiaries from pursuing legitimate claims over the validity of a will or trust. For instance, if there was evidence that a deceased person was forced to act under duress or other undue influence into executing a new will just before death, litigation would be the only way to remedy the situation.

Florida Does Not Enforce No-Contest Clauses

Florida is actually one of a few U.S. states that actually refuses to enforce no-contest clauses in either wills or trusts, largely because of the concern cited above. In Florida, any clause that purports to “penalize any interested person for contesting the will or instituting other proceedings relating to the estate is unenforceable.” Note that this law only applies to the no-contest clause itself. It does not otherwise amend, revoke, or invalidate the remainder of the will. Florida law makes similar provisions for trusts.

In practice, this means there is no penalty for a beneficiary or other interested person who decides to contest a will and loses in court. Their inheritance under the challenged will would remain unaffected. Also keep in mind that even if a no-contest clause is enforceable, it does nothing to discourage individuals who were already completely disinherited under the will.

While the probate of a will is generally conducted under the laws of the state where the testator died, the same is not necessarily true for trusts. A person making a trust (known as the settlor) can designate what state’s laws will govern the trust’s interpretation and enforcement. So even if the settlor lived and died in Florida, the trust might designate another state as the legal situs of the trust–i.e., a state where a no-contest clause would be enforceable, even in Florida courts.

As you can see, simply inserting a no-contest clause into a will or trust is no guarantee that there will not be subsequent litigation. An experienced Pompano Beach estate and trust litigation lawyer can provide you with further guidance and advice in this area. If you are involved in a potential legal dispute and need to speak with someone, contact attorney Mark R. Manceri, P.A., today to schedule a consultation.