Does A Subsequent Marriage Or Divorce Revoke A Will? 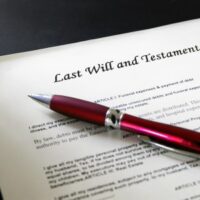 When a person makes a last will and testament, that document remains in force until either (1) the person dies and the will is filed for probate or (2) the will is legally revoked. Revocation can be accomplished either through physically destroying the original will or by signing a written document–including a superseding will–that explicitly revokes the will.

One question that often comes up, however, is whether a significant life event, such as marriage or divorce, can serve to revoke a will absent any express act or revocation. The short answer is no–a will is not automatically revoked by such an event. But certain provisions may be altered according to the law.

Let’s start with the case of divorce. Suppose you made your will when you were married and you left your entire estate to your spouse. You also named your spouse as the personal representative of your estate. Sometime later, you end up getting divorced, but you never got around to updating or revoking the prior will. So what happens if you die with the existing will still in place?

As far as Florida law is concerned, your spouse was effectively written out of the will the moment your divorce became final. Section 732.507 of the Florida Statutes provides that “[a]ny provision of a will that affects the testator’s spouse is void upon dissolution of the marriage of the testator and the spouse, whether the marriage occurred before or after the execution of such will.” The law essentially instructs the probate court to interpret the will as if your former spouse died before you.

Keep in mind, however, that if you decide to sign a new will after your divorce that names your ex-spouse as a beneficiary or fiduciary, the court will likely honor your wishes.

Now consider the opposite scenario. You made a will when you were still single. You then later married but died before updating your will to include your new spouse. How does Florida law treat this scenario?

Section 732.507 states that subsequent marriage does not revoke an existing will. But your spouse cannot be disinherited either. Instead, another section of Florida law–Section 732.301–states that your spouse will inherit the same share of your estate as they would have had you died without a will. The only exception to this would be if you and your spouse signed a prenuptial or postnuptial agreement in which they waived any right to inherit from your estate.

Speak with a Florida Revoked Will Lawyer Today

Anytime there is a question as to whether a will has been partially or completely revoked, it is important to seek out competent legal advice from an experienced Pompano Beach estate and trust litigation attorney. Contact attorney Mark R. Manceri today if you would like to schedule an initial consultation to discuss your situation.